Levels as a common language? It seems not.

One of the arguments that often comes up for maintaining levels is that everyone understands them (even parents) and so we have a “common language”. To test this theory I took four statements from the old Writing attainment targets and asked people to say what level they thought they came from. I chose writing because all writing is now teacher-assessed at KS2, and so it seems that it would be the area that teachers could reasonably be expected to know best. So, how did people do in my fairly unscientific survey?

Around 60% of people got this right. Perhaps it’s reasonable that the figure wasn’t too high, given that handwriting tends to be less of a factor in most people’s assessments.

Most underestimated it, suggesting that we perhaps have slightly higher expectations for our students than the National Curriculum does! Or at least, that teachers are aiming high for their students.

Statement 2: Simple and complex sentences are organised into paragraphs.

Again, 60% of responses thought it was a level 4 criteria. Only 1/5th correctly identified that paragraphs are actually only required for national curriculum level 5.

This is probably a confusion caused by the widespread use of APP and other criteria which don’t quite match up to the original attainment targets, it seems.

Statement 3:  Full stops, capital letters and question marks are used correctly, and pupils are beginning to use punctuation within the sentence. 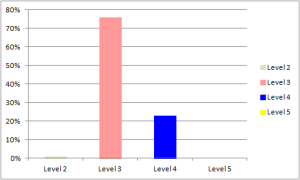 Given that Level 4 is the core business of upper Key Stage 2, and punctuation is a key element of writing, it would seem that this should score very highly.

In fact, 3/4 of respondents thought it was a level 3 criteria, presumably because they’re used to using a wider range of punctuation in writing with their students.

Statement 4: Paragraphs are well constructed and linked in order to clarify the organisation of the writing as a whole.

It’s fair to presume that most primary teachers wouldn’t be too familiar with statements of this high level. That said, it seems rather surprising that a large majority thought that this statement that is intended to describe exceptional performance was considered to be the norm for around 1/3 of 11-year-olds each year. Perhaps this system isn’t as clear as people like to think.

So, far from a common language, it appears that we’ve actually got a vague and unhelpful set of guidance that few people have fully grasped.

It’s time to move on!

2 thoughts on “Levels as a common language? It seems not.”

My Tweets
Join 49,733 other subscribers