Thoughts on the latest fiasco 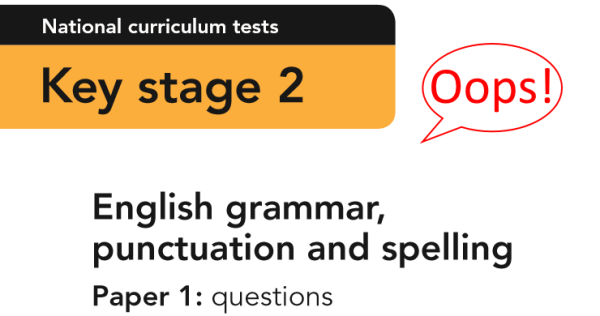 If I’m honest, I feel a bit sorry for the DfE today. But Nick Gibb did his best to temper any sympathy I felt. So here are a few thoughts on the latest in what seems to have been a long run of cock-ups – the accidental release of GPS test papers and mark schemes to markers a day early.

The DfE are off the hook (well, almost)

It seems that this particular mistake was entirely the fault of the private contractor, Pearson. The department has outsourced the marking arrangements, fairly reasonably, and the organisation has let them down. Notably, the Chief Executive of that company admitted their mistakes immediately. Perhaps something the minster could learn from here?

In reality, fewer than 100 people actually accessed the tests, all of whom were under contractual obligation to keep confidential any knowledge they acquired in the course of their work. Nick Gibb was right to say that many markers already have such access and have to be trusted to keep it to themselves. I see no evidence that a test paper was actually shared, so no reason to cancel the tests particularly.

No evidence of a ‘rogue’ marker

I also see no evidence that any test paper was “passed to a journalist”. The fact that a journalist came to know of the error is not the same thing. As yet, we don’t know how that came about, and so Nick Gibb had no business making such claims. This smacks of desperation, and as Tony Parkin commented on the Schools Week article earlier today, it may be that had the marker not alerted the press, that we would never have known about it. Personally, I prefer that the department be held to account, particularly given its wholly incompetent handling of the whole assessment debacle elsewhere. If the marker who shared the information had really intended to undermine the tests, it could far more efficiently have been done by many other means that reporting to a reputable journalist.

Sources must be protected

Journalists have every right (and hopefully ever intention) to protect their sources. The 93 markers who downloaded the document should not be harassed our accused in any way. For a start, at least 92 of them have done nothing wrong, and should not be hampered by the errors caused by their employer. Indeed, they are owed an apology for being put in this very difficult position.

In the case of the 93rd, it should absolutely be the case that Pearson should investigate how it became possible for this incident to occur. I cannot see how any further action could be taken to identify who shared the information.

In the grand scheme of things, this ought to be a minor sideline at the end of a news bulletin. Mistakes happen every year with exams; it’s inevitable. It’s a massive operation running on very tight timescales. There was no real harm done to students or teachers today, only to reputations at Pearson and the DfE.

I feel for the civil servants who have been forced to rush through the rapid changes in unmanageable time frames. But I have no sympathy at all for ministers who have time and time again claimed that they “make no apology” for their actions. It’s time they recognised that this year’s assessment process has been a disgrace, and that they  – to use a word of Nick Gibb’s choice today – are the culprits.