For some time now I have been working on a model of teaching Writing built around the idea of longer blocks focusing on fewer things. Previously I have written about a model I used in my previous school, and since then have had many requests for more information.

This year I have finally produced some notes about the model I use, based on 4 Writing Purposes. My view is that rather than trying to teach children 10 or more different ‘genres’ or ‘text types’ as we used to do in the days of the Writing Test, rather it is better to focus on what those types have in common. It means that at my school we use 4 main types of writing across KS1 and KS2: Writing to entertain; to inform; to persuade; and to discuss.* 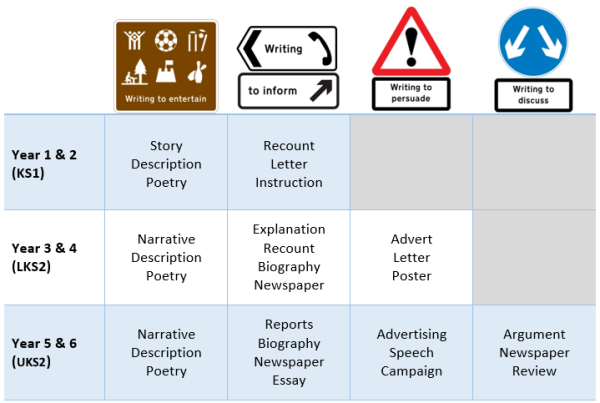 The 4 main writing purposes, and some of the ‘text types’ that could fall under each.

Importantly, by the end of KS2 I’d hope to see children recognise things like the fact that newspaper articles could actually fall under any or all of the 4 headings: they’re not a distinct type in themselves, really. 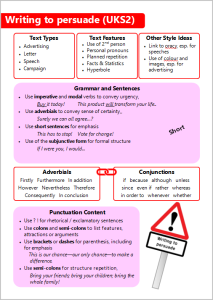 To support structuring the curriculum in this way, I have now compiled some guidance notes for each category. I say compiled, rather than written, because much of the legwork on these notes was done by my wife – @TemplarWilson – as she rolls out a similar model in her own school.

The guidance notes attempt to offer some indications of National Curriculum content that might be covered in each section. This includes some elements of whole-text ideas, suggestions for sentences and grammar, notes on punctuation to include, and also some examples of conjunctions and adverbials.

Alongside the guidance sheets, I also have the large versions of the 4 main roadsign images, and an example text for each of the four purposes. The example texts are probably of more use at the upper end of KS2, and could almost certainly be improved, but they are a starting point for teaching and analysis by the children to draw out key features, etc. Both can be downloaded here:

*Secondary English teachers may recognise these as being loosely linked to the old writing triplets at GCSE level.

It’s different to most jobs I guess. For a start, we get 13 weeks holiday a year. We also work in strange circumstances that are simultaneously both very public and quite private.

We also seem to have an on-going struggle with what it means to a profession, that doesn’t seem to affect other roles. Or rather, an on-going clamour to be considered a profession, without being clear about what that means.

The College of Teaching has served to highlight some of those troubles, but also one other: we seem to have reached a point in the profession where “leaders” can be lumped together as a “them” who are not in any way connected to “us” at the chalkface. (Disclaimer: I don’t know which group I end up in according to those determined to divide in this way)

I suspect that this is based, in part, on a truth: some school leaders are awful. Some who reach the position of headteacher (or Executive Head for that matter, I suspect), probably weren’t very good classroom teachers, and aren’t very good leaders. They can damage schools, teachers and pupils in the process. But to presume that such negative experiences mean that all those who have a leadership responsibility are in opposition to those who teach in classrooms is childish. Not least because it fails to account for the huge number of people – particularly in primary schools – who manage both leadership roles and considerable classroom teaching commitments.

This has come to a head from the small group of vocal opponents to the College of Teaching, particularly since the appointment of a very experienced headteacher to the role of Chief Executive. For some, led by Andrew Smith (@oldandrewuk), only a practising classroom teacher would have been acceptable to lead an organisation that they don’t even think should exist.

The problem with that argument is clear: what experience does the average classroom teacher have that would equip them to lead a significant organisation? There will, of course, be a handful of classroom teachers who have prior experience in other roles that might match the job description, but they are rare. And often such people would quickly take on leadership roles within schools, hence disqualifying them from this very narrow field.

What’s more, I’d argue that being the CEO of a large organisation doesn’t require the skills of a classroom teacher, any more than running British Airways would require you to be trained pilot. Running large organisations requires  a specific skill-set, and if the College is to be a success, then it needs the right people with those skills at its head. The fact that within teaching we have excellent school leaders who have the appropriate skills means we are able to appoint the combination of leadership and teaching experience.

The reality is, teachers aren’t some superhuman species imbued with some professional brilliance that makes them better than GPs or Chartered Surveyors. We are trained for a job. And all the while that some of those teachers also acquire the skills to lead large organisations, it is great that we can have a qualified and experienced teacher at the head of a professional body; but let’s be serious: it’s not the talent for imparting phonics knowledge that is required to manage a large charity.

Of course, the real issue here is not the appointment of  the CEO. Those who are wholeheartedly opposed to the College – or who object to the way it has been developed – would likely have opposed any appointment, just as those who object to the existence of the BBC would never welcome a new Director General.

For those of us who would like to see if this thing can work, it strikes me that you would struggle to find a better starting point as CEO than Dame Alison Peacock – an experienced teacher and headteacher, a strong figurehead who is widely supported by the profession, and someone who has publicly spoken in the past against proposals from government.

Some will always be happy to throw stones, just as there are those who continue to criticise the BBC. Personally I hope that both groups are proven to be in a minority.

Let me start by saying that I think consistency is vital in schools. Pupils need to know that the behaviour policy will apply equally to everyone, and be applied equally by everyone. If a school has a uniform, then rules about it should be fairly and consistently applied to all. Children in Year 4 are entitled to just as good teaching as children in Year 6.

But there are limits. And it seems that too many primary headteachers cross them, to my mind. Not all, of course, but too many. On Twitter today a perfect example was shared by Rosie Watson (@Trundling17):

Going thru really old teaching stuff. Found this gem! Anyone work out why I left this school?! 😂 #IsThisNormal ?! pic.twitter.com/Pt6ecA48yR

There is a headteacher – or senior leadership team – somewhere that thought it was an useful use of its time to come up with a list of 30 “must haves” that include how the classroom door must be signed, and that pegs must be labelled in week 1.

I wasn’t even that surprised when I saw it, because I’ve known far too many schools get caught up in such nonsense. Display policies can sometimes be the most read in a primary school, and I’ve known them include things like:

The point is that none of these things is necessarily a bad thing. Indeed, the one about staples appeals to my slightly frenzied mind. But to dictate it to a staff of highly-trained professionals? To expect teachers to spend their time and energy on such things rather than planning and preparing for learning strikes me as crazy.

What surprised me most about Rosie’s post, though, was not the content –  I fear that’s all too common – but the fact that some headteachers then tried to defend such approaches. The claims were that it was a useful reminder, or helpful for new teachers.

I have two issues with this. Firstly, the list is very clearly presented as a list of expectations to be met and judged against – not just helpful reminders. Secondly, these are not all good uses of someone’s time. If they were recommendations that I was free to ignore (and believe me, I would ignore a good number of them), then that’s fine, but that’s clearly not the case here.

If a school is insistent that its classroom doors have name labels in a certain style, then it should organise this administrative task, not simply demand it of teachers. Teachers’ time should be spent on things that directly impact teaching and learning, and precious few of these do.

Sadly, such “non-negotiables” seem to have become something of  a norm in school, with headteachers thinking that the way they ran their classrooms is now the way that others should follow suit. But it’s madness.

Headteachers are well aware of the strategic/operational divide between governors and heads, but they should consider a similar separation from the involvement in classrooms. Absolutely it is the place of the headteacher to lead on matters of curriculum and learning, and even to set the broad principles and expectations for the “learning environment” (oh, how I hate that term!), but that’s not the same as specifying the date by which your pegs are labelled.

The only other argument that was tentatively put forward was for schools which are in “a category”. Now here, I have some sympathy with heads who take on a school where things are a mess. Sometimes a clear list of expectations helps to brings things out of a pit – but that clearly isn’t the case here. If classrooms are untidy, it’s reasonable to expect that they be tidy; if disorganised cloakrooms are delaying learning, then it’s reasonable to expect something to be done about it. But no school was ever put in Special Measures because boards were backed with ‘inappropriate’ colours, or because  a Year 6 classroom didn’t have a carpet area.

And if  a school is in measures, then it probably shouldn’t be wasting its attention on how the classroom door is labelled! Both the leadership team and the teachers more widely should be focusing on the things that make the most difference to teaching and learning. Of course expectations should be raised, but that doesn’t need to be done through a foolish consistency.

Headteachers and Senior Leadership teams: you are busy enough – don’t sweat the small stuff, and certainly don’t make others sweat it for you!

For an indication of some of the mad things that are dictated in primary schools, take a look at this Storify in response to my tweet:

What's the most foolish "non-negotiable" rule you've seen in a school?

I offer "All display work must be double-mounted".