It’s three years since I last wrote a list of recommendations for who to follow on Twitter, and since then some have stopped tweeting, some have been promoted, some have even skipped the country – and of course, many new twitter folk have arrived. So I thought it about time for an update. I’ll try to limit myself to just 17.

Stephen Tierney (@LeadingLearner) – when I first heard Stephen speak at a conference up north, I thought instantly that he’s the sort of Headteacher I’d like to work for. Everything I’ve read of his since has confirmed that view. (It helps that’s he’s executive HT of a cross-phase group of academies).

The Primary Head (@theprimaryhead) – another Head for whom I suspect it’s great to work – I presume he’s not anonymous in his own school.

John Tomsett (@johntomsett) – a secondary head, and a voice of calm in an otherwise tumultuous Twitter world.

Jill Berry (@jillberry102) – Jill is a former headteacher who now shares her knowledge about the challenge of the role, and keeps a good eye on other developments in education.

Rhoda Wilson (@TemplarWilson) – this is a bit of a cheat, as I’m also married to her, but I do very much follow her on Twitter, and then steal many of her excellent ideas about teaching primary English, including whole-class reading (and often pass them off as my own!)

Sinead Gaffney (@shinpad1) – a hugely knowledgeable expert in literacy, and my go-to person when I need a KS1 expert, even though she’s moved to work with the big kids now.

Jon Brunskill (@jon_brunskill) – the sort of Key Stage 1 teacher who dispels any myths about infant schooling being warm, fuzzy and directionless!

Rachel Rossiter (@rachelrossiter) – a SENCo, which makes her a great port of call for all such queries, but mainly a genius at use of pun – what more can you want from Twitter?

Education DataLab (@edudatalab) – data experts from FFT who quickly shed light on topical issues by looking at the data to find answers (including those which are not always welcomed by the DfE, I’m sure). Director @drbeckyallen is also worth a follow.

Jamie Pembroke (@jpembroke) – on the data theme, Jamie is my favourite sort of data expert, in that he recognises the many flaws and limitations of the stuff. His wisdom on sensible use of data is welcome in today’s climate.

Daisy Christodoulou (@daisychristo) – sometimes people refer to me as an expert on assessment; I’m far from it. Daisy is absolutely that: she has spent time thinking about assessment in depth in ways that have completely changed my thinking. Look out for her new book in the spring too.

David Didau (@LearningSpy) – after a brief spell of being banned from Twitter, it was a relief to have David back. A man who speaks confidently about what he understands of education – including honesty about when he’s got things wrong. We could all do with such a balance of knowledge and humility.

Sean Harford (@harfordsean) – few people have done so much to transform the damaged reputation of Ofsted, and Sean has done it largely by thinking and talking common sense. The more people who are following him, the more we can #HelpSean to  spread better messages to schools. It’s probably also worth following new HMCI @amanda_spielman.

Sam Freedman (@samfr) – a director at Teach First who has connections and insights at the highest levels of policy that are often insightful. Tends not to get involved in the nitty-gritty of classroom practice, but expert on how teachers can best get government to work for them!

The impossibility of Teacher Assessment

I’ve said for a fair while now that I’d like to see the end of statutory Teacher Assessment. It’s becoming a less unpopular thing to say, but I still don’t think it’s quite reached the point of popularity yet. But let me try, once again, to persuade you.

The current focus of my ire is the KS2 Writing assessment, partly because it’s the one I am most directly involved in (doing as a teacher, not designing the monstrosity!), and partly because it is the one with the highest stakes. But the issues are the same at KS1.

Firstly, let me be frank about this year’s KS2 Writing results: they’re nonsense! Almost to a man we all agreed last year that the expectations were too high; that the threshold was something closer to a Level 5 than a 4b; that the requirements for excessive grammatical features would lead to a negative impact on the quality of writing. And then somehow we ended up with 74% of children at the expected standard, more than in any other subject. It’s poppycock.

So we need to decide what constitutes “over-aiding” pupils. At either end of the scale, that seems quite simple.Just short of 90% of responses (of 824) said that the following broad guidance would be fine:

Similarly, at the other extreme, 92% felt that the following ‘slow-writing’ type model would not fit within the definition of ‘independent’: 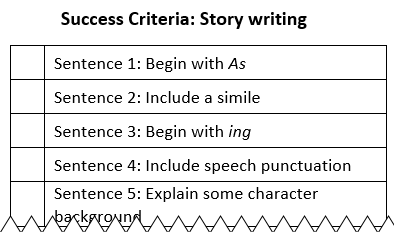 This is all very well, but in reality, few of us would use such criteria for assessed work. The grey area in the middle is where it becomes problematic. Take the following example: 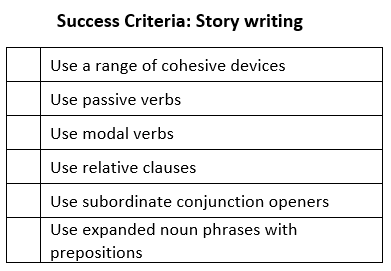 In this case results are a long way from agreement. 45% of responses said that it would be acceptable, 55% not. If half of schools eschew this level of detail and it is actually permitted, then their outcomes are bound to suffer. By contrast, if nearly half use it but it ought not be allowed, then perhaps their results will be inflated. Of course, a quarter of those schools maybe moderated which could lead to even those schools with over-generous interpretations of the rules suffering. There is no consistency here at all.

The STA will do their best to temper these issues, but I really think they are insurmountable. At last week’s Rising Stars conference on the tests, John McRoberts of the STA was quoted as explaining where the line should be drawn:

That advice does appear to clarify things (such that it seems the 45% were probably right in the example above), but it is far from solving the problem. For the guidance is full of such vague statements. It’s clear that I ought not to be telling children to use the word “anxiously”, but is it okay to tell them to open with an adverb while also having a display on the wall listing appropriate adverbs – including anxiously? After all, the guidance does say that:

Would that count as independent? What if my classroom display contained useful phrases for opening sentences for the particular genre we were writing? Would that still be independent?

The same problems apply in many contexts. For spelling children are meant to be able to spell words from the Y5/6 list. Is it still okay if they have the list permanently printed on their desks? If they’re trained to use the words in every piece?

What about peer-editing, which is also permitted? Is it okay if I send my brightest speller around the room to edit children’s work with them. Is that ‘independent’?

For an assessment to be a fair comparison of pupils across the country, the conditions under which work is produced must be as close to identical as possible, yet this is clearly impossible in this case.

The temptation is to say that Teacher Assessment can be robust if combined with moderation. But again, the flaws are too obvious. For a start, the cost of moderating all schools is likely to be prohibitive. But even if it were possible, it’s clear that a moderator cannot tell everything about how a piece of work was produced. Of course moderators will be able to see if all pupils use the same structure or sentence openers. But they won’t know what was on my classroom displays while the children were writing the work. They won’t know how much time was spent on peer-editing work before it made the final book version. They won’t be able to see whether or not teachers have pointed out the need for corrections, or whether each child had been given their own key phrases to learn by heart. Moderation is only any good at comparing judgements of the work in front of you, not of the conditions in which it was produced.

That’s not to imply that cheating is widespread. Far from it: I’ve already demonstrated that a good proportion of people will be wrong in their interpretations of the guidance in good faith. The system is almost impossible to be any other way.

The stakes are too high now. Too much rests on those few precious numbers. And while in an ideal world that wouldn’t be the case, we cannot expect teachers to provide accurate, meaningful and fair comparisons, while also judging them and their schools on the numbers they produce in the process.

For the results of all eight samples of success criteria, see this document.

My Tweets
Join 49,731 other followers