On joining the Chartered College of Teaching

After overcoming a few stumbling blocks, I’ve finally joined the Chartered College of Teaching. I say finally not because of the few days’ delay (my bank apparently thought my signing up might have been a fraudulent use of my card. Do they know me at all!?), but because it strikes me that this is something that’s long overdue.

I’ve always been a member of a teaching union – aren’t we all? – but like so many teachers, that was in part for the protection offered. Unions are there to protect and improve pay and conditions; while they may dress their arguments up in pedagogical terms, the bottom line is the same. And that’s all well and good: that’s their job.

But that conflict also makes it very easy for the government to dismiss what teachers say through their unions – not least the more militant groups with their outlandish demands at conferences. The profession more than ever needs a clear conduit for its opinions and expertise.

But a professional body has to cut both ways. As well as conveying views from the profession to the wider world – from parents to the DfE and Ofsted – it must also offer something to members. I’m pleased to see that the College will provide members with access to educational research, but perhaps more importantly I look forward to a useful professional journal that will help do the job of disseminating that research in ways that can have an impact in classrooms. We’re a time-poor profession as it is, and few of us have time to wade through academic journals on a regular basis;  an intelligent chartered college can be the medium through which teachers receive the very best of information on good practice – and also the very clearest of evidence to dispel the nonsense of the likes of Brain Gym and Learning Styles.

The key thing at this stage is to get people participating. If the college appears not to be the finished article, I’m hoping it’s because it isn’t. I hope, too, that that means teacher members will shape it.

So let me offer a few requests for Dame Alison Peacock and her team as she leads the College in its formative stages:

The Chartered College is currently signing up founder members, who must be teachers in schools, Early Years or post-16 settings: https://www.chartered.college/eligibility

I’ve updated the videos I made last year to explain the KS1 and KS2 tests to parents. As there is an option about using the Grammar, Punctuation & Spelling tests in primary schools, there are now two versions of the video for KS1 (one with, one without the GPS tests).

Please feel free to use these videos on your school’s website or social media channels, or in parent meetings, etc. There are MP4 versions available to download.

A 5-minute video guide for parents about the National Curriculum tests in Year 6https://t.co/YxZl74CncP

Key Stage 1 – version for schools not using the GPS tests

A short video about the Key Stage 1 National Curriculum tests for parents of Year 2 pupils:https://t.co/t3xOaSGCyT

When Jon Brunskill recently agreed to share his work on Knowledge Organisers in primary school, I was excited to see what he came up with. I wasn’t disappointed, and I’m sure many others have been looking with interest. I think there’s a lot of merit in the model, but inevitably I think there is some refining to do.

I say this not as an expert – far from it, I’ve cobbled together one Knowledge Organiser in my life and remain unhappy with it. However, having spoken briefly to Jon about his, I think we both agree that there is merit in unpicking the model further.

Firstly, with Jon’s permission, let me share an image of the organiser he shared (I highly recommend reading the accompanying blog before continuing further with mine!) 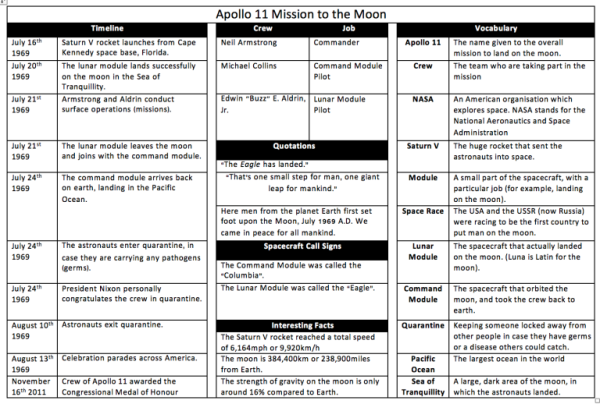 Taken from Using Knowledge Organisers in Primary by Jon Brunskill

At first glance, it looks like a lot of content to learn. I think that’s partly because most of us have spent a good many years teaching broad ideas, and not expecting children to learn detail off by heart. I think there are also very few of us who could hand-on-heart say we know all this content to recall. But I think that represents the shift we need to make rather than something to fear.

That led me to question the purpose behind the Knowledge Organiser. I haven’t spent enough time thinking about them, and certainly not enough time using them, but when I have, I’ve usually considered it a vehicle for outlining the key information that I expect students to learn and retain for the longer term. Often over longer units of work these might include key ideas which are integral to later understanding, whether that’s later in the school year, or later in their education career.

By way of illustration of my thinking, let me share a knowledge organiser I constructed a couple of years ago for my Year 5/6 class 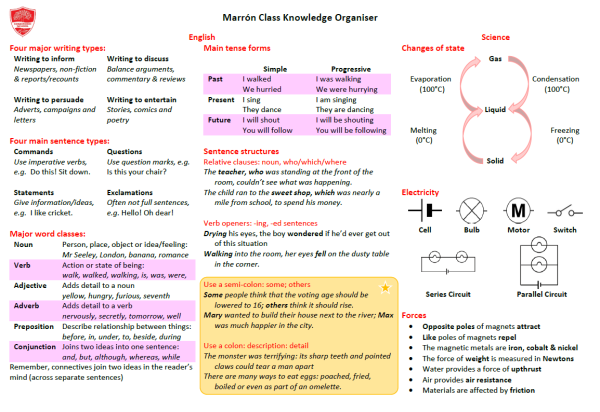 My first attempt at a Knowledge Organiser in 2015

The differences are quickly obvious. For a start, mine is clearly based on a wider period of teaching, and perhaps more indicative of a basic revision guide, rather than providing content in advance of a unit. I think perhaps that’s also its biggest downfall. It’s worth noting that it’s something I tried and didn’t come back to.

But I think there is maybe a useful middle ground. In Jon’s case, much of the content set out – particularly on the timeline – is content that is useful for the purposes of writing an information text about the event itself (a task which Jon plans to do in his Y2 class). However, I don’t think he expects those students to secure that detail in the very long term. Arguably, this brings the organiser perhaps closer to the cramming model of revision than the more successful spaced practice approach.

Ruth Smith posted a comment on Jon’s blog saying she could imagine the organiser being used as a prompt during writing. While I can see the merits, I do think that the risk then – as Jon would rightly say – is that we replace the value of knowledge with the reliance on someone/something else to do the work for you. That’s not the aim here.

It leaves me wondering what the function of a Knowledge Organiser should be. I’m not persuaded of the value of knowing the date of leaving quarantine after the lunar landing. That said, the value of learning the word ‘quarantine’ is something I think is highly valuable.

The question for me becomes one of later testing (and let me be honest, I’m only at the very beginning of this journey; don’t for a second presume that I’m an expert. I’m a way behind Jon on this!)  In a knowledge rich curriculum, I think one of the key functions of a Knowledge Organiser is to set out the key knowledge that I want students to retain and that I will test for.

We know of the great merit of spaced testing to aid learning, and it strikes me that a Knowledge Organiser should aim to set out that content which would likely later form part of such tests. In the context of Jon’s organiser, I could see merit in testing much of the vocabulary, the date of the landing, and perhaps the names of the crew. However, I’d also want to include some wider context – perhaps a bit more detail behind the Space Race, mention of JFK’s 1960 aim, etc. Might these replace some of the less significant dates of 1969?

Of course, we’re talking about 7-year-olds in Jon’s context. They will lack much of the wider historical knowledge to place events in context, and so there is a risk of expecting too much. But equally, if we train children that knowledge is to be learned, then ought we not be training them to learn it for the long term?

The content I think* I’d like to see on Knowledge Organisers is the detail that I would also expect to use in a brief pop quiz a week later, but also on a test mid-year drawing on prior units, and again at the end of the academic year, or in the first days of the following September. There is a risk that using Knowledge Organisers to aim for short-term recall of detail that is later lost, will develop a cramming ethos, rather than one of long-term storage of information.

What does this mean for Jon’s example? I’m not sure. Maybe a separation of the content that he expects children to retain in the long term from information which would be useful in this context? There is certainly some merit in having this timeline clear in the child’s mind as they are writing – not least because it helps to build a narrative, which is a great learning technique –  but is it necessary for it to be stored in long-term memory? Indeed, is a two-week unit even long enough for such a transfer to be made?

Yet there is unquestionably information here which would be re-used in future that would allow such a long-term retention.

More thinking to do… but well worth doing, I think.

*I say I think, because I am not entirely sure that I won’t think completely differently in six months time.