Why is Mastery just for Maths? 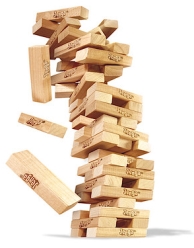 The trouble with failing to lay proper foundations.

With the new National Curriculum, and a whole host of new players in the field of education, it is certainly a time of innovation of sorts in our schools. I have been interested in the work being done by Ark and others looking at mastery in mathematics. It seems that their approach – based in some part on that used in Singapore and like places – is built on the premise of covering fewer topics in greater depth each year, with the intention that over the course of a child’s education they receive a thorough education in each stage of the process.[1]

This strikes me as sensible. Too often I have taught children at KS3 who have raced through the curriculum, picking up bits of skills, but for whom the basics of number knowledge and calculation are still insecure. The comparison to the end-moments of the game, Jenga, is too often fitting: students who lack the secure base on which to build their higher knowledge soon come crashing down.

It has meant that this year I am approaching my teaching of maths with something of a mastery model.

But I’ve got to thinking. Why does it need only to apply to maths?

I’ve also, this week, seen students in my class complete an unaided writing task in which it seems they ignored everything they have been taught this half term and just jotted down notes at random. After some initial frustration (as is common), I soon realised that the fault here was mine (as is also common).

I have taught them a good deal over the past few weeks in terms of writing skills. But I’m not convinced I’ve given them enough time to really securely practise and secure their use of those skills. And so, just like the kids who can’t do their tables in Y10, I’ve got students who haven’t applied even half of what they’ve learned.

I suspect that my model of teaching is not unlike that of many other primary teachers. We’ve looked at a particular genre, linked to a theme we’re studying, over a couple of weeks, and I’ve used that vehicle to teach some appropriate structures and techniques. However, I fear that the downfall of the process has been the movement on to another genre and another set of techniques for the next fortnight. Indeed, I know many schools where each block lasts a week before moving on.

What I’ve begun to consider is not yet a fully-formed idea, so excuse my thinking ‘out loud’, but I’m wondering now if maybe I need to re-think how I tackle these things. What if next half term I identified just a handful of core skills that I wanted to really allow the children to explore and embed. My initial thoughts are to select just three issues from text, sentence and word level (à la Literacy Hour 1998)

So, for example, I might decide that next half term I’m going to focus on:

Those key ideas can be woven through the themes and genres we’re looking at in a variety of ways, but importantly, in ways which complement one another, and which allow the children to become more proficient at each of them, rather than flitting from one idea to the next. They’re sufficiently broad to allow for a sensible amount of development and differentiation, while still providing a sense of connected learning and practice for all.

My units planned so far for next half are likely to be ghost story-writing, creating a narrative from a comic strip, and then some form of descriptive writing about the locality. Each of those would easily lend itself to all three of those skills – with some particularly strong in different areas – and so perhaps by the time we reached Christmas I might have some students who were really secure in some of the elements of that, rather than having had a taster of lots of techniques, few of which have stuck.

Like I said, it’s not a fully-formed idea yet, so I’d be exceptionally glad of any thoughts and experiences from others who have tried similar things – or think it best avoided. All comments welcome!

[1] If you aren’t already familiar with the Ark Mastery Project, it’s worth taking a look at their website for a brief insight: http://www.mathematicsmastery.org/

13 thoughts on “Why is Mastery just for Maths?”

My Tweets
Join 49,732 other subscribers