As ever with such things, it is important to point out that this data is not a scientific sample, has not been verified, and could be completely meaningless. However, in the absence of any comparative data from the DfE, it is an attempt to give some vague indication of the national picture of schools that took part in the MTC sample.

At the time of writing, some 211 sets of data had been submitted to the open spreadsheet online. Because it’s an open spreadsheet, there’s no guarantee that it doesn’t have errors, or that some data hasn’t been damaged, or even completely made up. With that in mind, I have completed some very simple calculations based on the data to give some idea of indicative figures.

The mean average of all pupils’ results was 18.4

The mean average of all schools’ averages was also 18.4

There was talk at one point of full marks being the expect threshold. It’s no longer clear that this is the case, or even that there will be a pass mark of any sort at all, but within the sample: 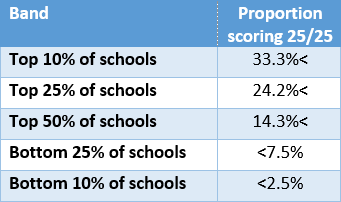 More pupils did score full marks than any other individual score, with scores clearly more likely to be at the top end of the scale. 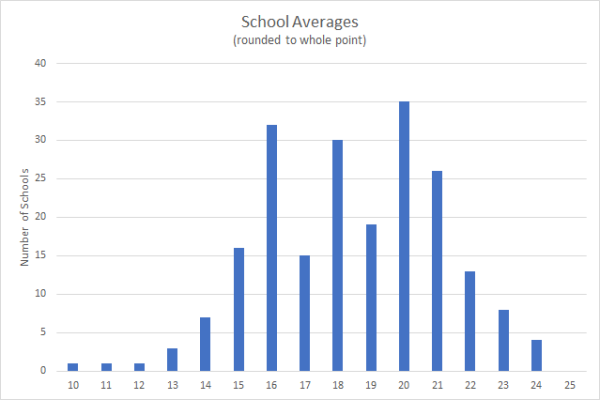 Does any of this mean anything? Not really… it’s a tiny sample from a voluntary pilot of a new test with no clear expectations hastily compiled from questionable data. But some of it is at least slightly interesting.