A mastery model for Writing: moving away from the text type treadmill

Are we deceiving ourselves about cohesion?
(Cartoon from xkcd.com/724)

I wrote back in the autumn of 2013 about how I found the endless march through text types to be ineffective in really securing children’s skills in Writing. I have spoken at several events since about how our perception of a joined-up curriculum in primary schools may not be conveyed as well as we like to the children we teach. We often build our writing tasks around a common topic or text and describe this as building a coherent curriculum, but too often the cohesion is in the topic, and not in the skill of writing. I have likened this in the past to trying to build a wall with bricks simply by dropping lots of randomly-shaped bricks and hoping they’ll fall into place.

This year, I have tried to improve on this model by bringing greater coherence to the curriculum for Writing. That doesn’t necessarily mean moving away from thematic teaching, nor necessarily moving away from using the text types. However, my intention has been to adopt some of the principles of the mastery model that I discussed in my original blog: focussing on fewer aspects of writing for a greater length of time.

Initially, this was based on identifying common strands through the units we were intending to teach (see details in first blog). Later, however, I began to adapt the text types we were using to ensure that we spent longer focussing on common strands. The idea here was to group the text types together slightly to ensure that we spend longer focussing on common features rather than racing through the various types hoping that some of the content we threw at the children would stick!

Our initial model ended up looking something like this: 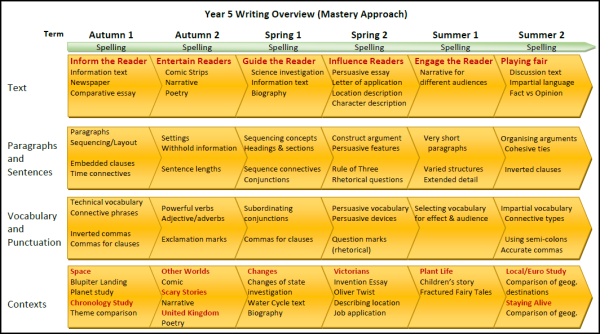 Over the course of the year we continued our usual units of study, with writing tasks adapted to focus on some common themes. Generally I would say that this has been a successful approach. I’m not convinced that it made any substantial difference to our progress in Writing this year, but I do think that the children have been – and will be – able to retain more of their knowledge of each of the genres, and so will be able to draw upon that knowledge more effectively in the future. One of my concerns of the race through the text types has been the lack of retention of the main features, meaning that almost every unit of work becomes a revision unit rather than developing further skill, at first at least.

As I approach the new year, however, I think there is more that could be done to develop this cohesion within and across year groups. Traditionally many schools have repeated the structure of the old Literacy framework by trying to get through many text types in each year, re-visiting regularly. My preference is to group the text types such that over the period of 6 weeks there are opportunities to learn and employ some of the key features. This has led me to a model based very loosely on the GCSE writing triplets:

I realise that this clear division into fiction and non-fiction blocks will fill some teachers with dread. Many teachers have a preference for one strand or the other, and so find the through of a whole half-term without their favoured type quite daunting. I can understand this, but our focus has to be on providing the most effective curriculum design to help our students to retain the key elements of learning.

The advantages of this approach are hopefully evident at least in part. By focussing on some common areas over a half-term, there are opportunities for students to experience, employ and adapt the various features and techniques being taught. Significantly, it will be possible to share with parents more detail of what is being covered in Writing, since the focus will be narrower. This also allows us to use target-setting more effectively, as students are able to learn from early pieces in the half-term and apply the target in the next piece. This replaces a system where too often children (particularly in upper KS2) have writing targets which are not particularly relevant to the text types/genres being taught.

Obviously this is just a broad example which doesn’t link directly to any topics or themes that are being taught. As with all models, it wouldn’t be possibly to transfer it wholesale from school to school because it would work best when properly aligned with the wider curriculum. However, hopefully it may provide an interesting discussion point for schools thinking about tackling the content of the new curriculum?

21 thoughts on “A mastery model for Writing: moving away from the text type treadmill”

My Tweets
Join 49,733 other followers